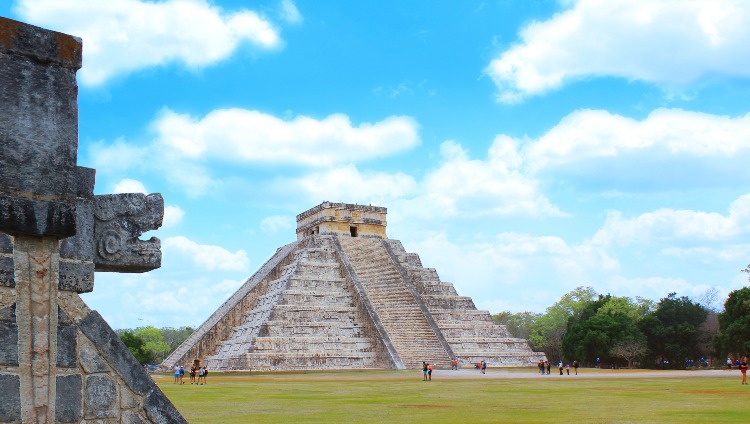 Among the Mayan ruins near Cancun, you can find the Scorpion temple named due to the shape of a scorpion. This archaeological site is a hidden treasure that many visitors don’t see when they come to Cancun. Don’t feel bad if you have come and haven’t seen it yet because this temple is not easy to spot at a glance. It is in the top of a hill, or structure built for the Mayans. It was used for them as an observation point. There is no entrance for the Boulevard Kukulcan, there are only two ways to find it, one is if you are a registered guest from the Hotel Grand Park Royal, and the other way is, entering by Playa Marlin and head north until you reach the hotel by the beach area. You can enter as if you were going to the hotel, and there is a road that will take you to the top of the hill. This is a temple open to the public since it is a Federal Property.

San Miguelito is the name given to the former copra ranch (farming ranch where the dried meat or kernel of the coconut was processed) that operated in the years of 1950-1970 in this area.

This Mayan city is in the Hotel Zone of Cancun. It was a Mayan settlement used for activities like fishing, agriculture, honey production, salt, and diverse products commercialized in the Yucatan Peninsula.

This archaeological site was named El Rey after the English Travelers Channing Arnold and Frederick Frost found a sculpture like a noble king.

This area was like San Miguelito was used for the Mayas for trade purposes and fishing activities. Inside the complex remains galleries with columns where is believe it was a type of convention center.

This Site is by Playa Delfines km.18 Kukulcan Blvd.

This archaeological site probably was named after the nickname of a local resident from the area around the 16th century. It is unknown now.

The site was a fisherman village, but this one had a relevant roll in the Mayan navigation along the coast. It was a commercial area like Xcaret, Tulum, Xelha, and Muyil. Here you can find several temples that Mayans used to have a privileged view of Cancun and Isla Mujeres.

During the excavations were found 14 structures including the castle, a pyramid around 17 meters high.

This archaeological site is one of the most relevant Mayan temples since it was built right at the cliff. This site has two names one is “Zama” meaning dawn, and “Tulum” meaning wall.

Here you will find several temples like the temple of frescoes, temple of the Descending God, and the castle which is the main structure facing the ocean. The Mayans used this area as a commercial port where they trade with Mayans from the south of México, Belize, Guatemala, and Honduras. All the merchandise was taken to the different Mayan cities spread out inland. Some objects like Jade and Obsidian were found in this area brought from Guatemala and Honduras.

This site is in the highway 307 km 128 south from Cancún passing Playa del Carmen.

One of the recent archaeological sites that are being studied by archeologist since 1994. The city is surrounded by a stone wall of approximately 1.25km2. Its translation is “Black Jaguar.” This site was used as farming land for corn and maintained commercial trades with Chichen Itzá. The INAH has restored around 16 structures among those “The Acropolis, The Oval Palace, The Arch, and The Football Field.” One of the most relevant and iconic figures are the enigmatic “Winged-Mayan Warriors.” Giorgio Tsoukalos affirmed his idea of ancient alien astronauts interact with ancient humans since this “Winged-Mayan Warriors” seems to have a type of flying suit. Here, you will be able to climb all the way to the top and view of the different temples spread out in the complex.

This important Mayan city is approximately 180 km west of Cancún.

An impressive Mayan city built near the lakes with more than 70km2 with more of 80% of the area still unexcavated. Coba had an important connection with the other Mayan cities in the Yucatan Peninsula, but also with other cities like Tikal and Teotihuacan. The meaning has different possible translations but the most accepted is “waters stirred by the wind” since the proximity to the lakes. The most popular temple is “Nohoch Mul” (Big Hill) the tallest pyramid with 42 meters high with 120 steps. “La Iglesia” (The church), The Mayan Football Field, and “The Observatory” are some other structures found in the complex. Here you can easily walk from the entrance to the temples, or to make it easier you could rent a bike, or paid for a Mayan taxi, a tricycle.

The most popular destination for thousands of visitors around the world since it began one of the new seven wonders of the world. Chichen Itzá was one of the major cities in Mesoamerica. It means “At the mouth of the well of the Itza.” The name of the ethnic group coming from Petén, Guatemala were named “Itzaes” (sorcerers). Here you can find the famous structure “The Castle” or the “Kukulcan” temple. Also, the Columns in the temple of a Thousand Warriors, The Great Ball Court, The Skull Platform, The Osario, The Church, The Sacred Cenote, and The Observatory.

An archaeological site located right in the Eco-park Xcaret, it was used for the Mayans as a strategic location for navigation and commerce like Tulum. Its meaning is “Small Inlet.” This area is open to the public whether you enter through the park or not. It was a settlement where the Mayans maintained trades with Mayans in Cozumel Island, Tikal, and Copan.

Cost: 70 pesos (It is a guided tour and doesn´t include access to the amenities the park offers)

Like Xcaret, this was a strategic location for navigation and commerce with multiple connections with other Mayan settlements spread out in Mesoamerica. The meaning of “Xel-ha” is (the place where the water is born). Here there are different temples scattered in the area.

we are an innovative company dedicated to offering tourist services in Cancun, providing our customers with a complete service and a fair relation between quality and price.