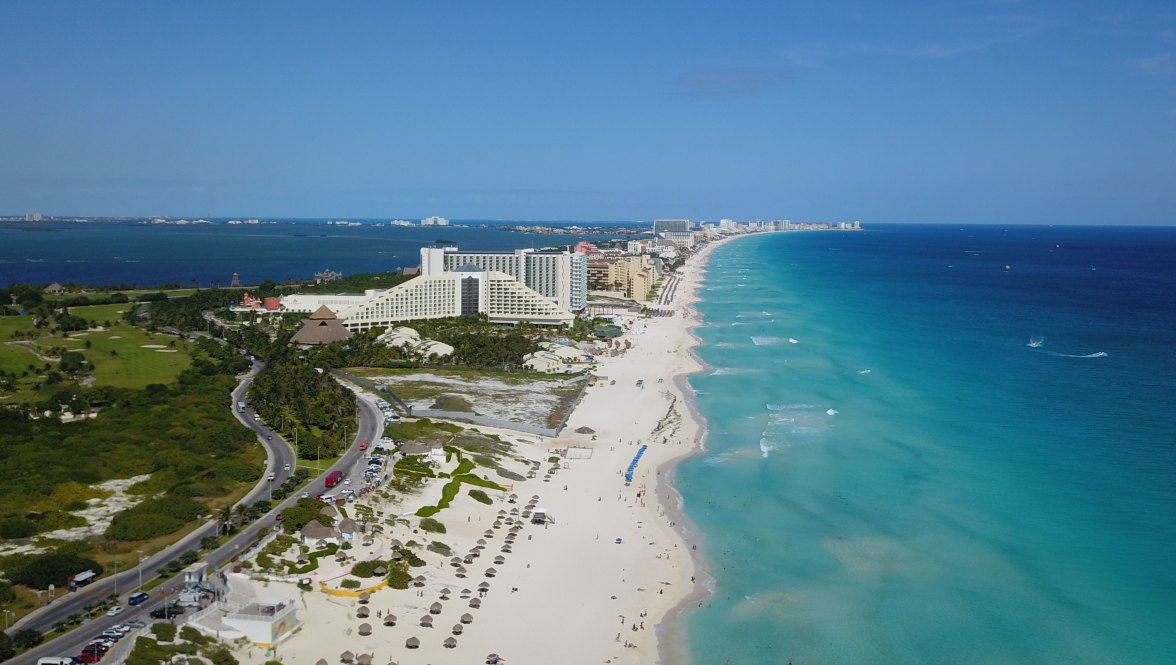 To understand about Cancun History, let’s start first for, what does the name mean? There are several probable translations, but I found out these two which most of the Mayan descendant people find most popular.

No matter what the real meaning is, but one

thing is for sure, “There is nothing to worry about the Snakes.”  The Mayans believed in Kukulcan, a feathered-serpent god.

Basically, the area of Cancun is an authentic Mayan city where they were settled in the past. Today you can find three Mayan vestiges. El Rey, (The King) which is in the hotel zone by Playa Delfines, Templo del Alacrán Yamil Lu’um, (Scorpion Temple), and El Meco, located nearby Playa del Niño.

How the Mayans were able to live in these areas with the lack of rivers?

The Mayans were able to flourish in this area that is called the Yucatán Peninsula due to the existence of thousands of Cenotes (Sinkholes) that exist spread out in the entire Peninsula. The Cenotes are some open, semi-open, and underground rivers.

The entire Peninsula was submerged into the water, some scientists believe that in the golf of México a meteorite impact drained the waters and the land emerged.

This is completely a true theory since you can find fossilized rocks and walls with reef formations incrusted.

Now, let’s continue with the history class, the creation of the Quintana Roo State. President Porfirio Diaz was trying to gain control over the territory next to the border of Belize, and he saw the great potential in this virgin area rich in natural resources. He declared in November 24th of 1902 Federal Territory of Quintana Roo.

Quintana Roo is the last names of Andrés Eligio, Writer,

and Poet born in Mérida Yucatán. His wife was Leona Vicario, both were insurgents in the process of independence of México.

It was until October 8th, 1974 when Federal Territory of Quintana Roo was established as the youngest newborn State.

The State is composed of eleven Counties.

Cancun is divided into five zones according to the municipal government.

Hotel Zone: This is the first and most important where most of the beach-front hotels are founded, some exclusive residences, and condominiums. Here, is where you will find the Most Beautiful Beaches in Cancun. This area is a narrow strip with a shape of a lucky “7” with an extension of 23km.

This is where everything happens, by Plaza Forum is the heart of the hotel zone, consider for many as the “Small Vegas.” This is where the Night Clubs are clustered together around this tiny area.

Urban Zone: This is downtown Cancun where the City Hall is located, shops, businesses, residential area, and local markets like the famous market 23, and market 28.

Puerto Juárez: This area is in the north part of Cancun where you can find the ferry terminal to cross over to Isla Mujeres. This is a residential area and a fisherman village.

Franja Ejidal: This is in the north part of Cancun in the limits of Isla Mujeres County continental area. This is an irregular settlement conformed mostly for newcomers.

Alfredo V. Bonfil: This area is in the south part of Cancun towards the airport. This area is a residential area, shops, and businesses.

Currently, Cancun has approximately more than one million residents. Most of them are coming from the different States of México, from different countries around the world as well.

Most of the visitors once they come for the first time, they are always returning for the hospitality that this beautiful destination offers plus the impressive views of the Mexican Caribbean.

Undoubtedly, this is the reason most of the people fall in love with this paradisiac destination.

If it happens that would like to do something while visiting us, check our tour options, or if you need more info, please drop us a line in our “contact us” section.

we are an innovative company dedicated to offering tourist services in Cancun, providing our customers with a complete service and a fair relation between quality and price.